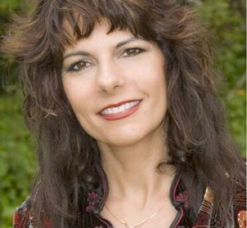 Risa Kaparo is an author, spiritual activist, psychotherapist, minister, master yoga teacher, dancer, poet and songwriter, and the developer of Somatic Learning®
As a young adult, Dr. Kaparo successfully healed herself from a painful and life-threatening illness.

The discoveries she made led her to create a methodology to transform pain, stress, trauma and aging and promote wellness, embodied mindfulness and vital longevity. This system, called Somatic Learning®, is based on a synthesis of psychological, somatic and meditative disciplines, having been developed during 35 years of research, clinical practice and training of healthcare practitioners, as well as yoga and meditation teachers. Her new book Awakening Somatic Intelligence: The Art & Practice of Embodied Mindfulness and its companion DVDs and CDs capture the wisdom of her teachings. A licensed psychotherapist and Somatic Learning® facilitator, Dr. Kaparo practices in the San Francisco Bay Area and by Skype, offering her unique approach to self-healing to thousands of individuals around the world. She has taught Somatic Learning® and Co-Presencing℠ her form of dialogue work at many institutions internationally, including MIT, JFK University, and China's Dalian Medical University, India’s Jindal Global University. An award-winning poet and songwriter with two CDs of poetry and music, Awaken and Grateful, and Embrace, a book of poems, her award winning poetry has been described as “a poetry of soul-making.” Dr. Risa Kaparo’s deep commitment to the art of awakening will intrigue, entertain and inspire you to engage the power of your own somatic intelligence. www.portalarts.com

This system - Somatic Learning® – was developed during three decades of research, clinical practice and training of health care practitioners. It is based on a synthesis of psychological, somatic, and meditative disciplines. As a licensed psychotherapist and somatic therapist, Dr. Kaparo has offered her unique approach to self-healing to thousands of individuals around the world. She has taught Somatic Learning at many institutions internationally, including MIT, New College, JFK University, CIIS and China's Dalian Medical University and India’s Jindal Global University.

Somatic Learning® involves simple practices that take only a few minutes a day, yet promote highly beneficial and lasting changes in the brain and the whole body, reorienting a person toward ever greater freedom, joy and aliveness.

In addition to her work with Somatic Learning®, Kaparo is an award winning poet and songwriter. She first received high critical acclaim for her sensitive, inspirational poetry embodied in Embrace (Scarlet Tanager Press, 2006), as well as her two CDs combining a unique blend of music and spoken word. In 2007, Kaparo was awarded the prestigious Grand Prize in the John Lennon Songwriting Contest. Her writing has been described by critics "as a poetry of soul-making" and integrates the themes of both ‘awakening’ and ‘embodiment’ (CLICK HERE TO LISTEN). Kaparo integrates her transformational work with creative writing, performance art, multi-media, music, voice and dance along with expressive arts therapy. This same artistry is reflected in the writing of Awakening Somatic Intelligence: The Art & Practice of Embodied Mindfulness and the companion videos. Risa Kaparo lives in the San Francisco Bay Area.

Querencia, Dr Kaparo also directs Inquiry’s newest program to train dancers to work with people who have survived extremity (ie. rape and sexual abuse, domestic violence, war, famine) to heal their trauma and reclaim their birthright to enjoy the gift of their embodiment. In shelters for battered women and children, they will teach dance as a social meditation in Ecstatic CoPresencing® -empowering the participants to return to the world feeling already secure and well loved from the inside/out.  This is an outgrowth of GlobalPeaceUprising.org, Inquiry’s art as spiritual activism program.
Dr Kaparo is also a cofounder of the Bay Area Functional Medicine group of doctors BayAreaFunctionalMedicine.com.  She is working on a new book and will be beginning a research and training program in 2018 on:
Buddha’s Brain for Elders: Neuroplasticity for the Aging Brain
Engaging Embodied Mindfulness, Quantum Coherence and Functional Medicine to Reverse and Prevent Alzheimer’s Disease & Dementia
Other Titles by Dr Kaparo currently in the publishing process:
Ecstatic Birthing: Wombing, Birthing and Bonding with Joy, Ease and Grace
Transformational Global Leadership: Synchronicity and Quantum Coherence
Dialogues on Dialogue: Book I Compassionate Communication:  Conflict Resolution and Cooperative Learning
Overcoming the incoherence inherent in our system of thought/feeling with Somatic Intelligence
Covenants of CoPresencing: Developing Dimensionally-Extended Social Intelligence
Awakening as Love: Polifidelity as a Social Experiment and Evolutionary Movement: Explorations in Intimacy, Freedom, Interdependence, Compassion and CoPresencing
Risa is also executive editor of Poets of Witness: An International Archive Dedicated to the Awakening of Freedom and Compassion through Poetry.  http://poetsofwitness.com.

The Development of Somatic Learning®

My practice of embodied mindfulness has been a life-long journey through what seemed like – from the outside, at least – contradictory disciplines. The journey bridged the worlds of science, spirituality, psychology and epistemology to generate a system with the capacity to help others radically transform at their most fundamental level.

My own realization of the infinitely self-sensing, self-organizing and self-renewing world of Somatic Intelligence within each of us began with a traumatic injury to my reproductive system.  I had internal bleeding that adhered my organs, causing extreme pain that immobilized me. The surgeon warned me that I would lose several organs, never have children, and probably be in pain for the rest of my life … even after successful radical surgery.  But I said no… I felt there had to be another way  … the urgency of this life threatening illness caused an awakening .

During this time, I applied what I learned prior to my injury, while working at the LightHouse in New York City teaching painting and sculpture to the blind, I spent many hours blindfolded to better understand how my students perceived their world. Many had been blind since birth.

Gradually I began to sense beyond vision, memory and imagination, transcending what I had previously experienced as self.  Once I shifted my awareness, I learned to understand pain as a portal - rather than a barrier – into my body’s deep, subtle movements, freeing me from the suffering I had endured for so long and allowing me to move in entirely new ways.

Awakening to a different way of sensing into my experience as unfolding movement… led me to discover that the there was a natural intelligence of the bodymind that not only ended my pain, but all healed me.  The internal bleeding stopped. Adhesions dissolved. And my organs regenerated.  Several years later, I naturally conceived and joyously birthed my daughter, who is now a beautiful 19 year old young woman.

That was the beginning of Somatic Learning.  Since then there’s been a growing body of scientific research that provides evidence for the capacity of the bodymind to heal itself from the inside out.

For instance, research has shown that the more a person is aware of their own body, the more a part of the brain called the insular lights up in an MRI.  The more active the insula, the more empathetic a person is.  So the very thing that someone must do to transform their own pain and trauma creates the foundation for loving compassion and kindness.  This has the potential for a collective healing for humanity.  We use mindfulness to change the actual brain in a way that inclines it increasingly toward happiness.

These changes are not just short-term effects.  In the famous words of Canadian psychologist Donald Hemp says, “neurons that are wired together fire together.”  So when you stimulate neural networks of positive states, you actually strengthen them. The brain changes permanently and further inclines to states of well-being and joy.

In the last three decades I taught the evidence-based methodology I developed for awakening Somatic Intelligence to thousands of people worldwide.  People suffering from many different ailments, have successfully used these practices to transform, pain, stress and trauma … and to prevent or reverse the deteriorating effects that we have come to associate with aging.  While at the same time enhancing joy, freedom and aliveness.

By creating an inversion in how we typically know ourselves from an outside-in, an image/object-bound experience, to an inside-out non-dual perspective, we dispel our incoherent, self-limiting, and chronically damaging modes of both physical and psychological functioning.

This inversion represents no less than a Copernican revolution in consciousness, as awareness of our own Somatic Intelligence allows us to live more fully embodied, here now, all at once.

Current research in neuroplasticity supports the fact that by accessing our Somatic Intelligence, we can transform not only our bodies, but also our minds.  This work has helped literally thousands of individuals suffering from a myriad of ailments.

All trademarks, trade names, logos, brand names and service marks displayed on this site, whether registered or unregistered, are the property of Risa Kaparo and are protected by the US and International trademark laws.